The recent passing of Leonard Nimoy prompts me to recall a lesser-known connection between the great man and the theory of (cusped) hyperbolic 3-manifolds, observed by my friend and former mentor Iain Aitchison. In particular, I am moved to give a brief presentation of the (unpublished) work of Aitchison on the theory of manifold-realizable special polyhedral orthocentric curvature-K complexes — or Mr Spock complexes for short.

This theory was developed by Iain Aitchison around 2000; some record can be found on the web here. From memory, I believe Iain explained some of this to me when we were both in Xian in 2002, but I could easily be wrong. The idea of the construction of these complexes is illustrated in the following figure:

The Aitchison-Wildberger maps (Iain just calls these “Wildberger maps” after a conversation he had with Norman Wildberger of UNSW) as follows. These are a 1-parameter family of injective maps

from hyperbolic space (of any dimension) to itself, depending on a choice of distinguished point at infinity, and a horosphere centered at that point. We can identify hyperbolic space with the upper half-space model, and normalize the horosphere to have height 1. Choose coordinates

is the “horizontal” coordinate, and

is the “height” coordinate (so that the distinguished horosphere has height 1), by the formula

(i.e. they generate a semigroup action) and satisfy the following geometric properties:

These geometric properties are illustrated in the figure; three points on three vertical geodesics are shown, along with their images under a discrete set of values of the Aitchison-Wildberger map. The “outermost” points are the feet of the perpendiculars from the “middle” point to the “outermost” geodesics. Fact 3, that hyperbolic geodesics are taken to segments of hyperbolic geodesics (and similarly in higher dimensions), follows from facts 1 and 2.

is a 1-cusped hyperbolic 3-manifold. There is a well-understood canonical procedure to associate to

which is a deformation retract. This is closely related to the “cut locus” construction in Riemannian geometry. Since

has a cusp, we can choose an embedded horotorus

there is a well-defined horofunction function

which simply measures (Riemannian) distance to

. This function is smooth, and its gradient points along geodesic segments heading out the cusp, precisely in the complement of the spine

. Another way to think of the construction is to “inflate” the horotorus

, pushing it deeper and deeper into the manifold, until it collides with itself; the locus of self-collisions gives the spine

. Now, each component of

is a geodesic polygon

, which comes with a canonical point

which is where the expanding horotorus first bumps into itself along

. Thus there is an isometry taking

to a subpolyhedron of a hemisphere of radius

is taken to the “topmost point”: 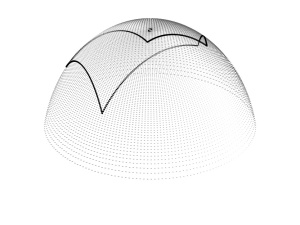 The figure shows an example of a hyperbolic pentagon

at the “top” of the hemisphere. Now, it makes sense in this normalization to apply the Aitchison-Wildberger map

. Crucially, these maps, defined on different polygons with respect to different normalizations, give isometry types of polyhedra which are compatible on boundaries. Let’s check this:

In particular, there is a canonical metric deformation of the spine through pieces which are the images under Aitchison-Wilberger map; rescaling the metrics to have fixed diameter, the curvature increases monotonely to 0 and we obtain a piecewise-Euclidean spine in the limit.

We can also think of this as a deformation of the geometric structure on the underlying 3-manifold; the Aitchison-Wildberger map applies to the part of the 3-manifold “above”

, deforming its metric compatibly with the deformation on the boundary. Dihedral angles between adjacent polygons increase monotonically to

under this deformation, and one obtains a branched Euclidean structure on

in the limit, where the cone angles along each edge are (generically) all equal to

. This suggests interesting connections to quadratic differentials, universal links, etc.; some of these ideas are explored in Aitchison’s (unpublished, partly written) preprint, but more presumably remains to be discovered. (Note: contrary to my memory, some version of Aitchison’s paper was actually written up, and can be found on the arXiv here. No mention of Mr Spock in this version though . . .)

Another, more intrinsic way to see this deformation is to consider the canonical foliation

tells us how to deform the metric at time

as follows: at each point

the tangent space splits as

is tangent to the foliation

. In this formulation it is more clear why the deformation is well-defined, but not at all obvious that it is constant curvature, away from the singular locus

. In this way, the Aitchison-Wildberger maps “beam” Mr Spock up to the cusp as