The purpose of this blog post is to try to give some insight into the “meaning” of the Hall-Witt identity in group theory. This identity can look quite mysterious in its algebraic form, but there are several ways of describing it geometrically which are more natural and easier to understand.

is a group, and

(note: algebraists tend to use the convention that

instead). Commutators (as their name suggests) measure the failure of a pair of elements to commute, in the sense that

, the property of being a commutator is invariant under conjugation (here the superscript

; again, the algebraists use the opposite convention).

is a space with fundamental group

, conjugacy classes of elements in

correspond to free homotopy classes of loops in

be some conjugacy class, and let

be in the corresponding free homotopy class. The element

is a commutator in

if and only if there is a genus 1 surface

(i.e. a torus) with one boundary component, and a map

for which the restriction of

. In words, an element in a group is a commutator if and only if the corresponding loop in a space bounds a genus 1 surface.

then the loops representing

can be thought of as the meridian and the longitude of the bounding torus. There’s some very nice pictures of this (and loads of other stuff) at the blog Sketches of Topology.

Now, the Hall-Witt identity is the identity

, valid in any group. To prove this identity it suffices to prove it in a free group, where it follows just by expanding the expressions (we use the convention that

. The other two expressions are all obtained from the first by cyclic permutation of

we see that the three expressions expand to

Incidentally, some people write the term

outside the brackets shows that this expression is equal to

which in turn is equal to

, which itself is equal to

. In a group in which three-fold commutators are trivial (i.e. a “nilpotent group of class 3”) this is just

and the Hall-Witt identity becomes a little simpler.

A slightly more geometric way to see this identity is to think about words in a free group as directed paths in a graph, where two words represent the same element if the corresponding paths are the same “after eliminating backtracks”. It is convenient to work in the graph whose vertices are the lattice

and whose edges are parallel to the coordinate axes and labeled

depending on their alignment. This graph is the fundamental group of the commutator subgroup of the free group

; one way to see this is to observe that the deck group

is equal to the homology group

, and to remember that this first homology group is just the abelianization. In this graph, the magic word

is a kind of “bent letter S”; see figure: 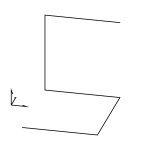 is a kind of dumbell, made by tracing around the boundary of two opposite squares in a cube together with an edge joining them:

The boundary of the cube can be decomposed into three such dumbells in a symmetric way, and this decomposition “explains” the Hall-Witt identity (pardon the lack of hidden line removal; I write figures in .eps):

Higher dimensional generalizations of this picture (where the loops going around squares are replaced with spheres going around cubes of various dimensions) explain why the Whitehead product in homotopy theory makes the rational homotopy groups of a space into a graded Lie algebra (this is still approximately true over the integers, except that one needs to be a bit careful about 2-torsion).

A more geometric way still is to think about maps of surfaces to spaces, and what are called gropes. An expression like

can be thought of geometrically as follows. The elements

are the meridian and longitude of a once-punctured torus

is itself the boundary of another once-puncture torus

, whose meridian and longitude (in turn) are

. Geometrically, we can think of 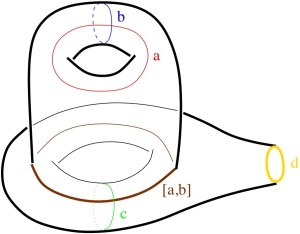 This grope can be embedded in 3-dimensional space, and thickening it slightly we obtain a genus 3 handlebody

whose fundamental group is

is a genus 3 surface, and the loop

, and the genus 2 surface as the “outside” of

with two copies of

attached. One copy of

is tucked inside the other; we can fold it out as in the figure to lay it flat. 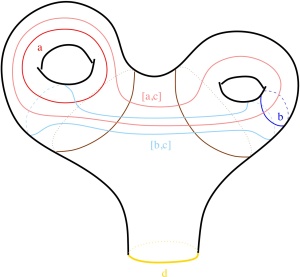 in an obvious way, in the sense that there is a choice of meridian and longitude corresponding to

respectively. The genus 2 surface can be expressed as a product of 2 commutators in many ways; a pair of embedded loops intersecting transversely once gives one commutator, and a disjoint pair intersecting in the same way gives the other. The figure indicates a choice for which one meridian-longitude pair is

up to conjugacy, and the other is

is not represented by a loop in the genus 2 surface, but rather as a path between the two loops where

as a product of something of the form

, up to suitably conjugating the entries. Keeping track of basepoints determines the correct conjugations, giving the Hall-Witt identity.

1 Response to The Hall-Witt identity