On page 10 of Besse’s famous book on Einstein manifolds one finds the following quote:

It would seem that Riemannian and Lorentzian geometry have much in common: canonical connections, geodesics, curvature tensor, etc. . . . But in fact this common part is only a common disposition at the onset: one soon enters different realms.

I will not dispute this. But it is not clear to me whether this divergence is a necessary consequence of the nature of the objects of study (in either case), or an artefact of the schism between mathematics and physics during much of the 20th century. In any case, in this blog post I have the narrow aim of describing some points of contact between Lorentzian (and more generally, causal) geometry and other geometries (hyperbolic, symplectic), which plays a significant role in some of my research.

The first point of contact is the well-known duality between geodesics in the hyperbolic plane and points in the (projectivized) “anti de-Sitter plane”. Let

, the hyperbolic plane is the set of projective classes of vectors

, the (projectivized) anti de-Sitter plane is the set of projective classes of vectors

, and their common boundary is the set of projective classes of (nonzero) vectors

. Topologically, the hyperbolic plane is an open disk, the anti de-Sitter plane is an open Möbius band, and their boundary is the “ideal circle” (note: what people usually call the anti de-Sitter plane is actually the annulus double-covering this Möbius band; this is like the distinction between spherical geometry and elliptic geometry). Geometrically, the hyperbolic plane is a complete Riemannian surface of constant curvature

, whereas the anti de-Sitter plane is a complete Lorentzian surface of constant curvature

In this projective model, a hyperbolic geodesic

. Moreover, the set of geodesics

in the hyperbolic plane passing through a point

are dual to the set of points

in the anti de-Sitter plane that lie on a line which does not intersect the ideal circle. In the figure, three concurrent hyperbolic geodesics are dual to three colinear anti de-Sitter points. 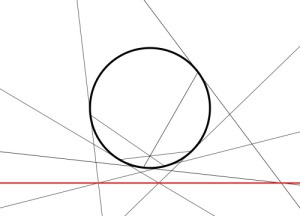 The anti de-Sitter geometry has a natural causal structure. There is a cone field whose extremal vectors at every point

are tangent to the straight lines through

that are also tangent to the ideal circle. A smooth curve is timelike if its tangent at every point is supported by this cone field, and spacelike if its tangent is everywhere not supported by the cone field. A timelike curve corresponds to a family of hyperbolic geodesics which locally intersect each other; a spacelike curve corresponds to a family of disjoint hyperbolic geodesics that foliate some region.

One can distinguish (locally) between future and past along a timelike trajectory, by (arbitrarily) identifying the “future” direction with a curve which winds positively around the ideal circle. The fact that one can distinguish in a consistent way between the positive and negative direction is equivalent to the existence of a nonzero section of timelike vectors. On the other hand, there does not exist a nonzero section of spacelike vectors, so one cannot distinguish in a consistent way between left and right (this is a manifestation of the non-orientability of the Möbius band).

The duality between the hyperbolic plane and the anti de-Sitter plane is a manifestation of the fact that (at least at the level of Lie algebras) they have the same (infinitesimal) symmetries. Let

denote the group of real

. This contains a subgroup

which preserves the “positive sheet” of the hyperboloid

, and acts on it in an orientation-preserving way. The hyperbolic plane is the homogeneous space for this group whose point stabilizers are a copy of

(which acts as an elliptic “rotation” of the tangent space to their common fixed point). The anti de-Sitter plane is the homogeneous space for this group whose point stabilizers are a copy of

and the quadratic form

both admit homogeneous Lorentz metrics whose point stabilizers are copies of

(which are isomorphic but sit in

in different ways). These

-manifolds are compactified by adding the projectivization of the cone

. Topologically, this is a Clifford torus in

Let’s go one dimension higher, to the

and the quadratic form

. Now only the sheet

is a Lorentz manifold, whose point stabilizers are copies of

, with an associated causal structure. The projectivized cone

bundle over the circle, and it inherits a causal structure in which the sphere factors are spacelike, and the circle direction is timelike. This ideal boundary can be thought of in quite a different way, because of the exceptional isomorphism at the level of (real) Lie algebras

denotes the Lie algebra of the symplectic group in dimension

. In this manifestation, the ideal boundary is usually denoted

, and can be thought of as the space of Lagrangian planes in

with its usual symplectic form. One way to see this is as follows. The wedge product is a symmetric bilinear form on

. The associated quadratic form vanishes precisely on the “pure”

-forms — i.e. those associated to planes. The condition that the wedge of a given

-form with the symplectic form vanishes imposes a further linear condition. So the space of Lagrangian

-planes is a quadric in

, and one may verify that the signature of the underlying quadratic form is

. The causal structure manifests in symplectic geometry in the following way. A choice of a Lagrangian plane

with the cotangent bundle

. To each symmetric homogeneous quadratic form

. Every Lagrangian subspace transverse to the fiber over

is of this form, so this gives a parameterization of an open, dense subset of

. The set of positive definite quadratic forms is tangent to an open cone in

; the field of such cones as

varies defines a causal structure on

which agrees with the causal structure defined above.

These examples can be generalized to higher dimension, via the orthogonal groups

or the symplectic groups

. As well as two other infinite families (which I will not discuss) there is a beautiful “sporadic” example, connected to what Freudenthal called octonion symplectic geometry associated to the noncompact real form

of the exceptional Lie group, where the ideal boundary

has an invariant causal structure whose timelike curves wind around the

factor; see e.g. Clerc-Neeb for a more thorough discussion of the theory of Shilov boundaries from the causal geometry point of view, or see here or here for a discussion of the relationship between the octonions and the exceptional Lie groups.

-cocycles on their groups of automorphisms. Note in each case that the ideal boundary has the topological structure of a bundle over

with spacelike fibers. Thus each closed timelike curve has a well-defined winding number, which is just the number of times it intersects any one of these spacelike slices. Let

be an ideal boundary as above, and let

denote the cyclic cover dual to a spacelike slice. If

is a point in

denote the image of

th power of the generator of the deck group of the covering. If

is a homeomorphism of

preserving the causal structure, we can lift

. For any such lift, define the rotation number of

as follows: for any point

. This function is a quasimorphism on the group of causal automorphisms of

, with defect equal to the least integer

such that any two points

are contained in a closed causal loop with winding number

. In the case of the symplectic group

, whose coboundary descends to the Maslov class (an element of

Causal structures in groups of symplectomorphisms or contactomorphisms are intensely studied; see for instance this paper by Eliashberg-Polterovich.